Recently, I had the privilege of honoring several living treasures of Ewa Beach.

The first was Sister M. Davilyn Ah Chick, who was chosen as Catholic Clergy of the Year by the Knights of Columbus Council in Ewa Beach.

Sister Davilyn has long been a leader and role model in Ewa Beach and the wider community. Born in Hawaii, she is the daughter of the late John Sr. and Dorothy Amy Ah Chick and one of seven children. She is grateful to her family because her parents, brothers, and sisters nurtured her to live life to the fullest.

For over forty years, Sister Davilyn has served in the Franciscan order. She is blessed to serve God’s people as a friend, religious educator, leader, and administrator. She is a volunteer locally, regionally, nationally, and internationally. Sister Davilyn is presently the Principal at Our Lady of Perpetual Help School in Ewa Beach. In this capacity she continues to touch lives on a daily basis and is performing in an extraordinary fashion. 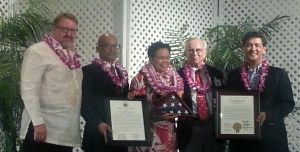 The other honorees we celebrated were Billy and Cely Villareal. They have long been leaders and role models not only in Ewa Beach but in the Filipino community as well. Their example of family, community, and stewardship is a beacon for all to follow.

As of 2006, Billy has been the tireless President of the United Pangasinan of Hawaii.  Since his ascendancy to this role, the association has reached greater heights. The Villareals open their home monthly to others, thus providing the Filipino elders a place to gather and talk story. Billy and Cely work as a team, and due to their hard work the membership has quadrupled because of their proven leadership and unwavering dedication.

Billy and Cely are American Patriots.  He is a former sailor, a hero who spent almost 30 years in the US Navy, while Cely served as a Navy wife, which is a job as hard as being in the Navy itself. Cely often mentored the younger wives on Navy life.  The Villareals have more than done their part in serving their adopted country.

All of these individuals are Ewa Beach treasures who enrich all of our lives on a daily basis. We are blessed to have them as our neighbors!