Representative Bob McDermott speaks with Darryl J. Vincent has been with U.S.VETS, for 11 years. As the Chief Operating Officer, he is directly responsible for the supervision of Executive Directors at all 11 sites, along with national administration of the overall operations of U.S.VETS. 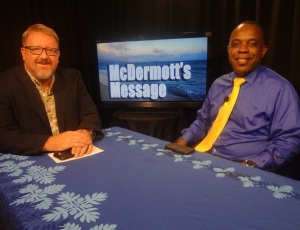 By now most folks are award that Campbell High School won the State Baseball Championship, led by State of Hawaii player of the year, Ian Kahaloa. We hope to see Ian in major league baseball someday! Also, Campbell won the Girls State Softball Championships, led by Elisa Favela who in the championship game, clubbed a pair of home runs, drove in seven runs and tossed a complete game to lead Campbell to a convincing 16-4.

Let us also shine the light on another group of champions who have not gotten the same recognition. The Campbell Swimming Team has made James Campbell High School history! They jumped into the season with a hunger in their bellies and a fire in their hearts.

This past season, star swimmer Makoa Alvarez, age 18, has taken his year-round training with West Oahu Aquatics and Campbell to new heights; he made sure nobody was faster than him. Makoa is being officially inducted into the Hawaii High School Athletic Association’s prestigious Hall of Honor for his non-stop wins all season long, as well as for his multiple new Hawaii state records. Way to go Makoa! You have made us all proud.

The Campbell Men’s Relay A Team, consisting of Makoa Alvarez, Josiah Ahuna, Raymon Tutewohl, and Samuel Bass, have won OIA West, OIA Championships, and placed 3rd and 4th in the 200 Medley Relay and the 400 Freestyle Relay at State Championships.

This has been a very exciting year for the Campbell swim team, being that they are currently the #1 OIA Men’s Swim Team. Now they will be saying goodbye to their seniors and hello to new comers, by getting them trained and pumped up for next year’s swim season. It cannot be stressed enough how influential all our supporters have been for us. On behalf of the Campbell Swim Team, I would like to give a huge Mahalo to the community for your continued support. Come watch these cats swim. GO SABERS!!! Go Campbell, a school of champions!

Rep. Gene Ward (R-Hawaii Kai-Kalama Valley) Head of the Hawaii-Sister State Delegation, today announced from Bali that the 3 days of talks between Hawaii and Bali have successfully ended.

“We have agreed to cooperate in 3 areas to make sure Hawaii and Bali remain the two most beautiful places in the world,” Rep. Ward said.

Working under a theme suggested by Bali’s Vice Governor, Ketut Sudikerta, of “Clean and Green”, the Hawaii delegation will be launching three projects that will assist their Bali counterparts, with cleaner beaches, disaster preparedness, and waste to energy projects.

“The 800 pound gorilla in the room during these talks was the mile long and 100 feet high mountain of garbage along the ocean front in Bali’s tourist mecca,” Ward said.

Trash collection and disposal is in its infant stage in Bali and the government is keen to learn from Hawaii how we keep our beaches and environment so clean. 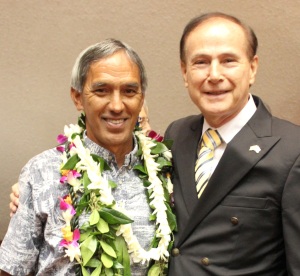 The sister state meetings coincided with the arrival of the Hokule’a and Captain Nainoa Thompson was a special guest at the meeting with the Vice Governor where he presented his global theme of “Malama Honua” (caring for the environment) that fit perfectly with the sister-state theme of the meetings.

Henk Rogers, founder and CEO of Blue Planet was also a temporary member of the Hokule’a and also addressed the sister-state delegations with a challenge to Bali – like Hawaii’s goal of ending dependency on fossil fuel by 2045. He also expressed serious interest in forming a “Blue Planet-Bali” to get more pressure on Bali legislators to stress renewable energy projects and legislation.

For this purpose talks between a member of Hawaii’s provincial legislature, Representative Tjokorda Gede Asmara Putra Sukawati, who attended the meeting, and Representative Gene Ward have agreed to begin immediate follow-up discussions to the Bali conference to get policy-maker buy-in and cooperation with such groups as a Blue Plant-Bali or other NGO groups wanting to clean up Bali and push renewable energy.

The talks concluded with a signed Action Plan between the Hawaiian Indonesian Chamber of Commerce, President David Day and the Governor’s office in Bali.

It is anticipated that a follow-up meeting to maintain the momentum and the accountability of the sister-state agreement will be held in Hawaii in December 2015 and will host the Governor of Bali who is presently working on re-establishing a direct flight between Bali and Hawaii on Garuda (Indonesian) Airlines. 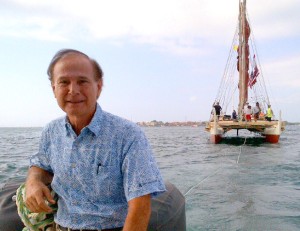 “The agreement concluded today holds forth much promise and keeps both us accountable to each other to maintain and lead with world class standards for our environments. This is truly an historic event and we were fortuitously blessed by the simultaneous arrival of the Hokule’a and its ‘Malama Honua’ cargo,” Ward concluded.