“This has been underway for a long time and the reason I think that it hasn’t come to fruition up till now is it got lost in the weeds of the arguments about marijuana,” Abercrombie said during the bill-signing ceremony. He later added, “Regardless of whatever has been in the past, I think we’re ready to move forward.”
Thielen touted hemp as an economic engine that could create jobs, encourage entrepreneurship and fill an agricultural void created when the isles’ sugar industry dissolved.
“We’re going to have a wonderful agricultural crop that will cleanse our soil and clothe us, feed us, and shelter us,” she said, lifting up a hempcrete brick and giving it a tap.
The state in 1999 implemented a law similar to the proposed bill, but Thielen said earlier this session that the DEA “really yanked the rug out from under that project after three years.” 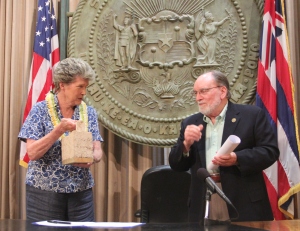 Kudos to Civil Beat and Chad Blair for being the only ones covering all of Tuesday’s nine hours of floor debate including the tiff with Speaker Joe Souki that almost got me removed from the House floor.

The only problem was that Mr. Blair got my quote wrong.

When my colleague, Rep. Richard Fale, was being rudely interrupted in his floor speech by Majority Leader Scott Saiki, I said, “Mr. Speaker, point of order — there is nothing in the House Rules that says we can’t criticize this body.”

Blair quote me as saying “members” instead of “this body”.

This caused an immediate recess to wit Speaker Souki got all upset when I said, “Joe, this is America — not Russia, you just can’t shut people down like that.”

So much for freedom of speech when you can’t criticize your own legislature — not its members, as Mr. Blair suggested I was doing.

Generally I wouldn’t comment on things like this because I am pretty used to it, but I think it is time for the public to know a bit more about our inner workings at the Capitol.

Compared to the state Senate, freedom of speech in the House is rather limited, especially against members of the minority who are more likely to be critical and honest about what they think about legislation.

So when a member is saying something that leadership doesn’t like, the bullying begins, though they call it “sticking to the merits of the bill.”

What they really mean is that you should not say anything negative about an overly sensitive super-majority leadership that disdains criticism of its legislation.

Rep. Fale’s remarks did not deserve to be shut down, but in a one-party state with 69 Democrats and seven Republicans, freedom of speech must be fought for and protected.

About the author: Rep. Gene Ward is the minority leader emeritus of the House. 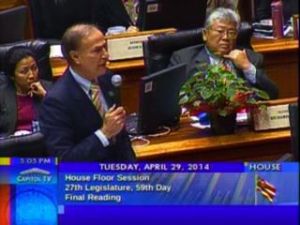