Some of us are old enough to remember when “IBM cards” and the mainframe computer represented the latest technology.

For decades, these devices were used as early forms of digital communication and data storage.

As technology improved, however, the personal computer and Internet were created, allowing these devices to be phased out.

The Internet was developed by the U.S. government, in part to be less vulnerable to attack or disabling than a centralized system like mainframes.

Now, in a world where virtually everyone has access to a personal computer, it’s hard to imagine using a gigantic mainframe computer.

In many ways, Hawaii’s electrical grid represents the dated mainframe computer model; a large power plant distributes power across the electrical grid. While a centralized power plant benefits from the economies of scale, it suffers power-loss over transmission lines and makes consumers more vulnerable to power interruptions.

It’s time for Hawaii to start thinking about replacing this model with a better system. Decades ago this undertaking wouldn’t have been possible, but the availability of advanced photovoltaic, wind turbine and other energy generators combined with better energy storage (i.e., battery) technology allow for Hawaii’s electrical grid to undergo a much-needed upgrade. And so far, we’re the national leaders in modernizing our grid.

A micro-grid is a self-contained system of energy production, distribution and load that’s much more likely to get us off of fossil fuels. These miniature electrical grids can serve one, or sometimes several, customers and generate electricity from one or more sources.

Micro-grids are also connected to the larger electrical grid to borrow power when needed (e.g. on windless or rainy days) and return power when a surplus exists. A home equipped with solar panels, battery storage, and an electronic control unit constitute one of the most common, simplest examples.

One of the biggest advantages of micro-grids is their self-sufficiency. Operating completely independent of the larger grid is called “island mode,” a benefit that is highly desirable when the traditional electrical grid gets knocked out by severe weather or a natural disaster.

It’s about time that we allow electricity consumers in Hawaii to make the switch from the mainframe to the personal computer. Micro-grids are a cleaner and more resilient alternative to traditional grids. In the future we may even be able to connect them to electric cars to stabilize the power supply.

Despite this, Hawaiian Electric Co. is trying to hold onto the old mainframe model. It is likely that traditional power grids will eventually be phased out, the only question that remains is whether Hawaiian utility companies will drag their feet or take the initiative to adopt this new technology.

Let’s face it: The mainframe is a dinosaur and we’ll only ensure its continued survival by providing a monopoly on the food chain. 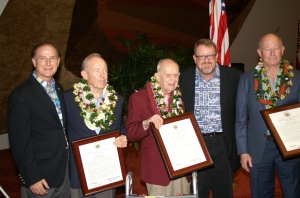 Representative Bob McDermott gave the Invocation at the Hawaii State House of Representatives on March 11, 2014.

Representatives Della Au Belatti and Cynthia Thielen Congratulate Hawaii Commission
on the Status of Women with House Resolution 198 (H.R. No. 198)

Congratulation to the Hawaii State Commission on the status of women for its 50 years of commitment to creating equality for women and girls in the state of Hawaii.

A program as successful as the Commission on the Status of Women requires remarkable people to be able to run it effectively. Today we are lucky to have just a few of the stellar minds behind the Commission with us on the floor.

I would first like to honor Ms. Cathy Betts, the current Executive Director of the Commission. Cathy Betts was honored here at the State Legislature in 2012 for her excellent advocacy and education efforts for Title IX, and her involvement in women’s advocacy is applaud-worthy. She has worked in the fields of family law, violence against women, child abuse and Title IX. She also formerly served as the Patsy T. Mink Legislative Fellow in the late Senator Daniel K. Inouye’s Washington D.C. office. Cathy is a former Deputy Attorney General with the State of Hawai’i’s Family Law Division and currently serves on multiple boards, including the Board of Directors for the Hawaii Filipino Lawyers Association and the Board of Directors for Hawai’i Women Lawyers.

Our next honoree is Ms. Pam Ferguson Brey, the Executive Director of the Crime Victim Compensation Commission. Ms. Brey previously served as the Executive Director of the Commission on the Status of Women, and as a Deputy Prosecuting Attorney for the City and County of Honolulu prosecuting family abuse cases, Deputy Attorney General representing the Department of Human Services in Child Abuse and Neglect cases. She has received several awards for her dedication to women’s issues including the 1994 Hawaii Women Lawyer of the Year award and also received an Outstanding Achievement Award from the National Association of Commissions for Women for initiating the first month long Women’s Health Month.

Next, I would like to honor Ms. Leslie Wilkins, the current Chair of the Commission. Ms. Wilkins is an experienced advocate for women, workplace diversity and equity issues. She also currently serves as the Vice President of Maui Economic Development Board and is a member of the University of Hawaii’s College of Engineering Dean’s Advisory Council, a member of the board of the YWCA of Honolulu, and is a national trustee for the Business and Professional Women’s Foundation. Ms. Wilkins was the primary designer, launcher, and leader of the Women in Technology Project, designed to engage more girls, women, Native Hawaiians and other underrepresented groups into the Science, Technology, Engineering and Math pipeline. She has also won many awards commending her achievements, to mention a few: Ms. Wilkins won the 2001 SBA Women’s Business Advocate Award for Hawaii and Federal Region IX, the 2005 International Economic Development Council Performance Award, and a 2010 Maui County Woman of Achievement Award.

I would lastly like to honor Allicyn Tasaka, who is the Current Director of Operations for Governor Abercrombie. Ms. Tasaka has a long history with the Commission, having served as a Commissioner from 1993-1996, Chair from 1994-1995, and as the Executive Director from 1998-2004. During her tenure, the Commission received an “Outstanding Achievement Award” by the National Association of Commissions for Women, presented in recognition of the 1994 Women’s Health Month project held in Hawaii for the first time. The award identifies and recognizes exemplary innovative women’s commission programs and projects. Allicyn also co-chaired the Hawaii Family Economic Self-Sufficiency Standard Advisory Committee, which served as a strong benchmark on the status of women in Hawaii. After nearly a 20 year lag of national representation, Allicyn was selected to serve as national director, representing Hawaii, on the National Association of Commissions for Women from 2000 to 2002, and in 2001, she was awarded the Community Service Award by Hawaii Women Lawyers.

Members, it is clear that all of these women individually and collectively have strived and succeeded in improving the status of women nationally and in the State of Hawai’i. Their accomplishments and awards deserve our warmest regards and wishes. With that, I would like to congratulate the Hawaii State Commission on the Status of Women on their 50th anniversary and wish them continuous success and regards for the future. Thank you. 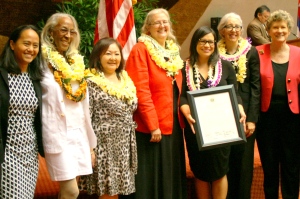 Representative Lauren Kealohilani Matsumoto delivers the Invocation to the Hawaii House of Representatives on March 10, 2014