Representative Gene Ward, Ph.D. discusses the scenic byway with Greg Knudsen
chairperson of the Hawaii Kai Neighborhood Board. Knudsen is also the coordinator for the Maunalua-Makapu’u Scenic Byway project under the sponsorship of the Ka Iwi Coalition, which is part of the Livable Hawaii Kai Hui. 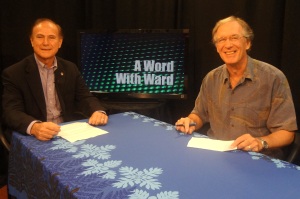 Among the measures it has introduced this session are bills that call for studies for a space exploration research and development park; an international flight training center and associated aeronautical training programs at the University of Hawaii at Hilo and Hawaii Community College; and a laser optical communications ground station in Hawaii.

Other measures call for the banning of unmanned aircrafts, except by law enforcement agencies, to gather information, and exempts from the general excise tax amounts received from the construction of a space launch facility in the State to help reduce the overall cost of such construction.

The caucus is a joint bipartisan effort in collaboration with the private sector to develop a strong, secure and internationally competitive aerospace sector in Hawaii. It will be a highly visible, proactive and solution oriented organization ensuring academia, industry and government are in step with programs and policies which support a robust aerospace economic sector.

“This collaborative effort is a significant step forward in building upon the aerospace industry that we are establishing here in Hawaii,” said Representative Angus McKelvey, Chair of the Consumer Protection & Commerce Committee.

Honolulu — Today the United States Senate approved the Agriculture Act of 2014, also known as the “Farm Bill,” which includes legalization of industrial hemp for research purposes. The Farm Bill states that industrial hemp may be grown for the purpose of state university or state Agriculture Department research without Drug Enforcement Administration permission. Ten states have passed legislation legalizing hemp, and House Bill 154 will make Hawaii the eleventh state.

State Representative Cynthia Thielen (R, 50th District: Kailua, Kaneohe Bay) co-introduced House Bill 154 which would authorize a two-year industrial hemp remediation and biofuel crop research program conducted through the College of Tropical Agriculture at the University of Hawaii at Manoa. When passed, this progressive legislation will keep Hawaii on the cutting edge of agricultural research, help the state realize the economic capabilities of the crop, and potentially restore land previously damaged by earlier contamination.

“With its ability to cleanse the soil of toxins, industrial hemp could be an environmentally friendly replacement for sugar and pineapple,” says Representative Thielen, remarking on hemp’s potential in Hawaii. “Hemp is often grown without pesticides or herbicides due to its natural ability to ward off unwanted insects and weeds. Furthermore, hemp’s potential as a biofuel feedstock could be a game-changer for Hawaii.”

Representative Thielen notes, “The global market for hemp consists of over 25,000 different products, with U.S. being the world’s largest consumer at nearly $500 million per year. Now that Congress has authorized states to grow industrial hemp, Hawaii can lead these efforts in a climate that will produce three crops a year.”